I have to be honest I think my love of running is drawing to an end. My first big event was 12 years ago with my sister when we ran Rock ‘n’ Roll Phoenix. Since then there’s been 2 marathons, a handful of other half marathons, and 2 kids, and the list goes on. Running seasons for me come and go, I’ll train for a race and then after it’s over I won’t run again for a few months.  And then I’ll get the itch and pick it back up again. So a couple months back it came time to put my running shoes on and get on track with my training for the Montreal Rock ‘n’ Roll Half Marathon.

I decided to try a training program based on time versus distance for this race. This means instead of plotting out training runs on the computer and calculating distances, I would just go out and run for a certain amount of time. I thought this would make the training more enjoyable and less arduous.  My training runs were fine but unless I had really great tunes set up to listen to I would get very bored.  The steady state cardio wasn’t doing it for me anymore. I would get home starving and eat everything in site. I didn’t look forward to my runs as much as I look forward to a 30 minute HIIT (high intensity interval training) or bootcamp workout. The HIIT workouts were doing a lot more for my physique. I was getting real muscles and then these long training runs seemed to be melting the muscles away. This annoyed me.  My HIIT sessions took a lot less time and delivered more results.  But I had signed up for the event and promised a buddy of mine that we would do it together.  So I had to be prepared, and had to keep training for it.  Then my joints started aching when I would run.  My knees and my lower back were in pain. This also annoyed me. And then during my final long run prior to the event, so much tension built up in my upper back (another problem with running- it can lead to hunched over posture if you’re not careful) that I got a crick in my neck and couldn’t turn my head without excruciating pain for 3 days. I kept wondering- Why do I keep running?

But then something magical happens. It’s called Runner’s High. And I experienced it again yesterday at the Montreal Rock n Roll Oasis Event. 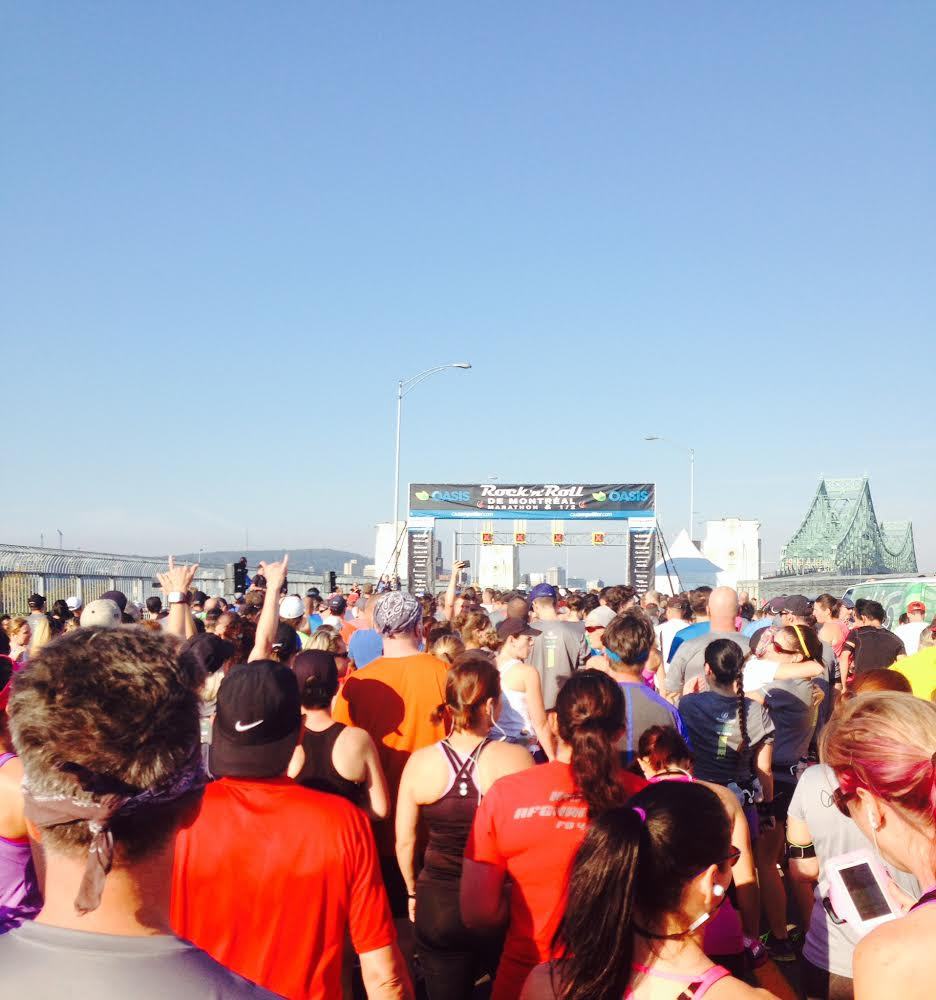 I woke up exactly one minute before my alarm was set to wake me up at5:45am. My mind was in it. I headed out to pick up my buddy and catch the metro to get to the Race start. Masses and masses of people were getting corralled into their respective start area, the brilliant sun was shining, the music was playing, photos were being taken all over the place, and 35,000 anxious runners were pumped for the race.  It took a very long time to reach the start line because of the amount of people.  We actually didn’t cross the start until 9:15 and the race had begun at8:30.  Once I finally reached the start and took off running, the sound of feet hitting the pavement is all I could hear. Like the thumping of drums, the sound starts to excite your insides and you just move with the rhythm.  Not worried about the route, just following the masses in front of you. Bands were playing, people were cheering from the sidelines, and the weather was glorious and out of sorts for the end of September. About an hour in, adrenaline took over and that’s when I really started enjoying the event.

But for me the true magic happens when I’m about 3 miles or 5k from the finish line. It’s when the fan crowd gets much bigger and louder and you can tell your fellow runners are digging deep. They are digging deep into their mind and body’s strength to find the last bit of oomph to finish their event. I can see it on people’s faces, I can feel it, and it gives me goose bumps. The thought that all these people around me are so close to reaching an amazing goal they have set for themselves is humbling. It’s awe inspiring to see so many people challenging themselves and their bodies.  They are so close to accomplishment, they can taste it. The finish line is inevitable, it’s just the last 10-15 minutes and we’re all going to do it. That’s the magic. Setting a goal, working for it, and the moments just before the goal is realized. This is called enjoying the journey and I absolutely love to feel it and to see others feel it too.

So my love of running isn’t over, just time for a little break and a lot of stretching!

If you would like to train for a race and want help training for it, please let me know!

Have a great week,